turn on your radios

I am now preparing to go on the radio with the message of "The Asian Diet" I have my own publicist and another from the publisher working on getting me booked on talk shows They have asked for my bio, bulletpoints, and questions I would like to be asked. I don't know if the hosts will ask all of the questions I suggest, some of them, in what order, etc., so I have to think about how I want to get the message out.

The hardest part of writing my book was determining the order. I have given this information hundreds of times as talks to patients and groups; but every time I present it I do it a little differently. For the book, I had to set in stone the order and the wording. Now I have to do that again to prepare for the radio interviews, but I won't know how the interviewer will proceed, so I cannot truly be prepared. But I am familiar enough with the message that I feel confident in my ability to articulate it.

So stay tuned for upcoming interview dates and times.
Posted by Jason Bussell at 10:28 AM No comments:

I am getting excited at the prospect of The Asian Diet helping a lot of people. I'm sure I was put here to help people, and I love helping my patients; but with this book, I may be able to help thousands or even millions of people. We are misinformed about food and this leads us to making poor food choices. If we have the knowledge regarding the ways that different foods affect us, then we are empowered to make the best choices.

I am excited that I have a lot of repeat buyers of my book. People come in to buy one, then return to buy multiple copies to send to family and friends. I have one person who has bought nine copies so far. This tells me that they like the book, and I am so glad that my message is getting through.

Well, I call it my message, but it is really not at all. My book is nothing but a synthesis of all I have been taught by many Masters, current and ancient.

I hope you all can read it. It's only $10 from amazon.com, but you can just check it out from the library. If your library does not have it, please ask them to get it. Health care costs are going to bury this country and The Asian Diet can prevent many types of disease.

I don't mean to brag, but the purpose of this blog is to share my thoughts and feelings durng this process, and right now I'm pretty excited.
Posted by Jason Bussell at 10:02 PM No comments:

I just completed my first book signing at the Book Stall in Winnetka. It was fun. I was a little nervous about how to allocate the time. I give this lecture, which I call "Living in Balance" to all of my patients and quite frequently to groups. It usually takes me about 60-90 minutes to give the talk; but for these book store signings, I can only talk for about 15-20 minutes before I have to take questions and sign books. It's hard to pare down my talk. But we had a good turnout tonight, and the people really seem to like the book. 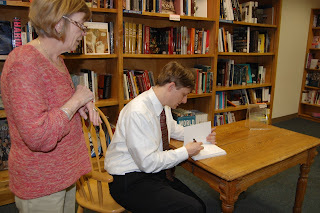 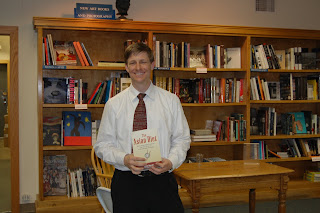 In other news, I just finished teaching a 24-hour course in Intro to Oriental Med. A lot of my students read my book and the feedback was very positive. This blog is not intended to be a place for me to toot my own horn, but it is very exciting to get this positive feedback on a project that I think can really help people.

Go to http://www.theasiandiet.com for more information about future book signings.
Posted by Jason Bussell at 9:29 PM No comments:

The Asian Diet featured on AOL

An interview with me was just posted to AOL.com's "That's Fit" site. Check it out at http://www.thatsfit.com/2009/05/14/asian-diet-for-weight-loss

I am grateful to be very busy lately and have not had as much time to post. Everyone go to www.theasiandiet.com and www.acfom.com for more information about my book and practice.

I have my first book signing on Monday the 18th at The Book Stall in Winnetka, IL at 7pm. This will be after eight hours of teaching, so my voice may be a little fried. A bunch of people have RSVP'd that they are going to attend though, so I am happy.

Then in June I have a signing at the Border's books and music in Wilmette, and July has me at the Barnes and Noble in Old Orchard shopping center in Skokie, IL And then in August I am giving a lecture and book signing at the Evanston library in Evanston IL. I am looking for more groups to present to, so if you know of any, please let me know at jason@theasiandiet.com.
Posted by Jason Bussell at 2:53 PM No comments:

Another feather for my cap. I was just appointed to the Illinois Board of Acupuncture. This is a government appointment, as opposed to my position with the Illinois Association of Acupuncture and Oriental Medicine, which is a professional association. I am grateful and feel honored to be appointed by the State.
Posted by Jason Bussell at 8:43 PM No comments:

More exciting developments. I have been mentioned in several more publications (e-zines and print). Tomorrow I have an interview with a TV personality to determine whether or not they would like to interview me on the air. I have set up two book signings and two library lectures, and was interviewed by AOL (let's hope they publish it). All this from my book, which I have to mention the name of or it won't be picked up by search engines "The Asian Diet: simple secrets for eating right, losing weight, and being well (www.theasiandiet.com)

I am also now teaching a class in Intro to Oriental Medicine. It's 24 hours, eight hours a day for three Mondays in a row. I have taught and lectured many times in the past, but never for more than two hours. It'll be a great learning experience, I'm sure.

I have been thinking about skeptics to acupuncture and Oriental Medicine. I read message boards that say that acupuncture research is not valid because it does not adhere to the double-blind, randomized, controlled, experimental model. Some say that the only valid type of study follows this type of design; one where everyone receives the exact same treatment, or not, and the person administering the treatment does not know whether or not he/she is actually administering the treatment. Double-blind means that both the patient and the practitioner do not know who actually is receiving the real treatment. This design is best for pills. But the critics say that any benefit realized by patients, even if it's a 100% cure rate for hundreds of subjects, may be attributed to placebo if the study did not utilize the double-blind.

For one thing, this method does not evaluate Chinese Medicine. The forte of Chinese medicine is in treating everyone individually. If I have to treat everyone the same, I am not practicing Chinese medicine. I am evaluating one set of points for one common symptom. Any acupuncturist will tell you that using the same set of points for everyone doesn't work nearly as well as customized treatment. It's like giving a mechanic 10 cars to fix, but telling him he can only change the brake pads. Some of the cars may need brake pads, some might not. If the mechanic was able to use his diagnostic skills and full repertoire, he could fix all the cars; but if you limit his ability, you will limit his effectiveness.

For another thing, the double-blind study is very difficult. It's hard for a patient to not know whether or not they have had a needle inserted into them. It is also hard for me, as a practitioner, to not know whether or not I have inserted a needle. They can make machines that may or may not insert a needle when I pull a trigger, but that's not how needles are inserted. It is not just the insertion of the needle that has the effect, it is the connection with the healer through that acupoint and needle. Remove the practitioner from the equation and you are no longer evaluating acupuncture.

I would like someone to show me the double-blind study that showed the effectiveness of hip-replacements. Could someone go through surgery and not know whether or not they had a joint replaced? Could a surgeon do the surgery and not know whether or not he/she actually replaced a joint? Well, then that means that all the patients who benefit from jip-replacements are merely benefiting from placebo.

Another problem; patients usually seek out acupuncture after several other things have failed. If belief and expectation are enough to make a bogus therapy effective, why didn't that work with the other modalities? Do patients expect drugs, PT, and surgery to fail when they undergo them? So either the only thing the patients' believe in is acupuncture, or the only thing that placebo works for is acupuncture.

That's all for now.
Jason
Posted by Jason Bussell at 7:50 PM No comments: