This is something I have been arguing for years.  We did not evolve by eating vitamins, carbs, protein, anti-oxidants, etc.  We evolved by eating food.  There are hundreds to thousands of compounds in naturally-occurring foods.  The complex way that they interact with our complex physiology is grossly under-estimated in the creation and marketing of supplements.  Read my book, The Asian Diet, and Michael Pollan's In Defense of Food and then start eating a wide variety of fresh, organic, local plants (mostly cooked).  A little bit organic, untainted meat is good too.  The following article is from Slate.com

The Vita MythDo supplements really do any good? 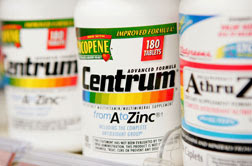 Deciding what to eat for dinner can be mind-bending. How do we keep track of the ever-evolving recommendations for what to put on, and leave off, the plate? Red meat might cause cancer! But don't replace it with tofu—soy concoctions might be carcinogenic, too! Don't even try to figure out where carbs stand this week. And the verdict on coffee, chocolate, and alcohol changes faster than you can order a mocha martini.

Vitamins—with their promise to bridge the gap between the nutrients our bodies need and those they get—have always seemed reassuringly simple: Just pop a multivitamin and let your body soak in those extra nutrients. But not any longer. During the past few years, study after study has raised doubts about what, if any, good vitamins actually do a body. They could even pose some real medical risks.
Half of all American adults take some sort of nutritional supplement. But research on a wide variety of patient populations and medical conditions has failed to find much evidence that multivitamins, the most commonly used of the lot, prevent major chronic diseases in healthy people. The most recent knock came this spring, when a study of more than 160,000 post-menopausal women, published in the Archives of Internal Medicine, found that the all-in-one pills did not prevent cancer, heart attacks, or strokes and did not reduce overall mortality.

Individual vitamins and minerals haven't fared much better under scientific scrutiny, with research debunking some of the reputed benefits of vitamin B6, calcium, niacin, and others. In 2006, the National Institutes of Health convened an independent panel of experts to evaluate the evidence that vitamins could prevent chronic disease. The scientists ultimately issued a report stating that studies "do not provide strong evidence for beneficial health-related effects of supplements taken singly, in pairs, or in combinations."
The news on antioxidants, the darlings of the vitamin menagerie, is even more troubling. These compounds, which include vitamins A, C, and E, selenium, beta carotene, and folate, fight free radicals, unstable compounds thought to damage cells and contribute to aging. But not only do antioxidant supplements fail to protect against heart disease, stroke, and cancer; they actually increase the risk of death, according to a 2007 analysis of research on more than 232,000 people, published in the Journal of the American Medical Association, as well as other studies.

Exactly why they might increase mortality is unclear, but doctors at prominent research institutions—including New York's Memorial Sloan-Kettering Cancer Center and Seattle's Fred Hutchinson Cancer Research Center—have highlighted some unsettling connections between supplemental antioxidants and an increased risk of a variety of cancers. Popping certain kinds of antioxidant pills can feed latent cancers growing in the body, for instance, and reduce the effectiveness of chemotherapy. These observations make a certain intuitive sense, since vitamins and minerals play an important role in the replication of healthy cells—why shouldn't they be doing the same for cancerous cells? (Feeding mice a diet poor in antioxidants, on the other hand, can actually help shrink their brain tumors.) Scientists are also beginning to suspect that the body may actually need free radicals—which help kill cancer cells, ensure optimal immune function, and regulate blood sugar, among other things—so we shouldn't necessarily be mopping them all up.

The list of worrisome findings goes on, but it doesn't seem to have put a dent in the $25 billion supplement industry. Sales are not only robust but rising in the United States. Doctors still recommend multivitamins as part of basic preventative care. Despite the demonstrated risk, as many as 80 percent of cancer survivors swallow a daily dose, according to a study published in the Journal of Clinical Oncology in 2008.

Vitamins have a powerful psychological hold over us. As precautionary health measures go, supplements are easy. Compare the two seconds required to swallow a pill with the constant vigilance necessary to exercise and eat right. And the fact that vitamins are available without a prescription makes them seem safe—even though it probably makes them less so, since they're not regulated by the FDA and manufacturers are not required to prove that they're effective at treating disease.

But the risk-benefit calculus has changed. We know more about the risks, and it's clear that there's also less potential benefit. During the early 20th century, diseases like scurvy and rickets were common until researchers began to isolate compounds in food—which became known as vitamins—that could altogether cure these ailments. It must have been remarkable to see devastating diseases alleviated with common foodstuffs.

During an era when many people legitimately had nutritional deficiencies, placing your bets on a multi might have been reasonable. But today, of course, actual deficiencies are much less common. Our salt, milk, flour, juice, cereal, and more are all fortified with extra nutrients, and a 2009 study published in the Archives of Pediatrics and Adolescent Medicine suggests that most of the kids who end up taking vitamins in the United States today don't actually need them.

If vitamins are useful for anything, it's probably for tapping into our old friend the placebo effect. In a 2008 survey, 38 percent of doctors confessed to recommending vitamins because they believed the pills could promote health purely through the power of positive expectations. Consider a famous 1975 study designed to probe whether vitamin C supplements alleviated colds better than a placebo, an inert lactose tablet. It turned out that it didn't matter much which pill the subjects were actually taking. What mattered was what they thought they were getting: Those who believed they were taking vitamin C had fewer and milder cases of the sniffles than those who believed they were just swallowing lactose. That would be reason enough to pop a supplement—there are worse things than deceiving yourself into better health—if it weren't for the emerging evidence that the pills might be capable of causing real harm.

That's not to say that vitamins aren't important. Vitamins are critical to all sorts of bodily functions, and we have to get them through diet because our bodies can't make them on their own. The Office of Dietary Supplements at the NIH recommends that we get certain levels of a variety of kinds of vitamins, and that recommendation is sound. But encouraging us to get a complete suite of vitamins is not the same as suggesting that we get them by popping a pill.

In fact, the reports littering the ODS site seem to converge upon the same point: There is some good news for supplements, but it's extremely limited. The 2006 NIH panel, for instance, concluded that postmenopausal women should probably take calcium and vitamin D to safeguard their bones; that pregnant women should keep taking folate; and that adults with age-related macular degeneration, an eye disease, should take a combination of antioxidants and zinc. But beyond that, the panel's strongest recommendation was that scientists conduct further research on the risks and benefits of vitamins. For every study that turns up disconcerting vitamin side effects, there seem to be two more that conclude that we simply don't know enough yet about supplements to make evidence-based recommendations.

Until we do, we should stop treating supplements like health candy and more like prescription meds, to be used only when there's a demonstrated need. Doctors should create individualized regimes, tailored to a particular patient's deficiencies. As for the rest of us, we can put the pills back on the shelf and save our cash for one of those martinis.